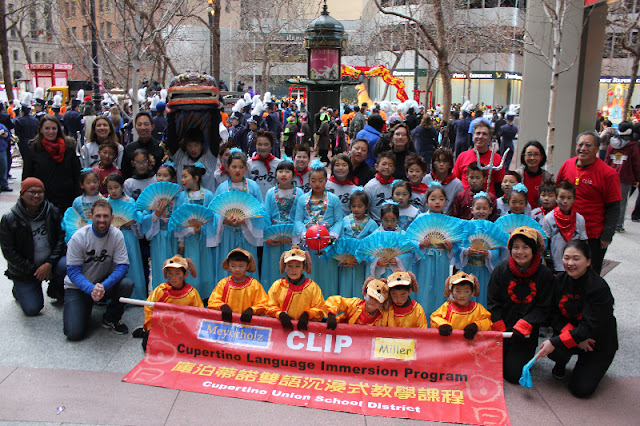 Meyerholz/Miller Clip participated in this years Chinese New Year Parade on Feb 24th, 2018. The kids did a wonderful job as the weather was briskly cold but no rain. Unfortunately, we did not get any TV time this year, as the camera crews cut to interview and commercial, although you could see a glimpse of our team in the back!

This year's theme and Story was that of a dog that becomes a prince by saving a princess with a terrible skin ailment. Hence becoming the first people/settlers of Bulan near the southern part of Taiwan.

In our marching troupe this year were two guards, the main princess, and a dog who wore a beautiful
custom-made two-person dog costume made by our own Clipco board member Jon Campbell.  We
cannot thank him enough for another year of creating another masterpiece.  The dog was followed by 12 jr princesses which comprised mostly of 1st thru 3rd graders who wore beautiful blue dresses to go along with our theme/story. Following our jr. princesses were our 6 dog marchers who were outfitted with royalty tops . The dog marchers were also mostly comprised of 1st thru 3rd graders. After them came our 10 drummers playing a spirited beat placed on our colorfully decorated wagons with lights. These drummers were mostly 3rd graders through 8th graders due to the nature of pulling and maneuvering the drums through the streets of San Francisco parade route. In total participants there were 34 kids walking the parade. Holding our Banner was the principal and vice principal of our respective schools.

We would like to acknowledge and give a special thank you to several key persons.
- First and foremost is Eileen Voon, she has the experience and knowledge of the previous many years of the parade and set a high standard of excellence of participation and reputation among parade organizers.
- We'd like to also thank all the committee members:
- Barbara Wang for handling all the preparations making sure things are in order.
- Edison Chiu showing the guards and the Dog Head and main princess in setting the pace for the parade.
- Mirna Wu for teaching the Jr. Princesses the dance routine to match
the drumbeat and Aileen Lai for assisting with that.
- Sandy Baba for teaching the dog marchers the routine and taking good care of our young marchers.
- Aaron Chao for assisting in parade.
- Matthew Heydinger for help with the drummers .

Judging awards has not been determined yet, but regardless we are very proud of the kids for doing an exceptional job!

Popular posts from this blog 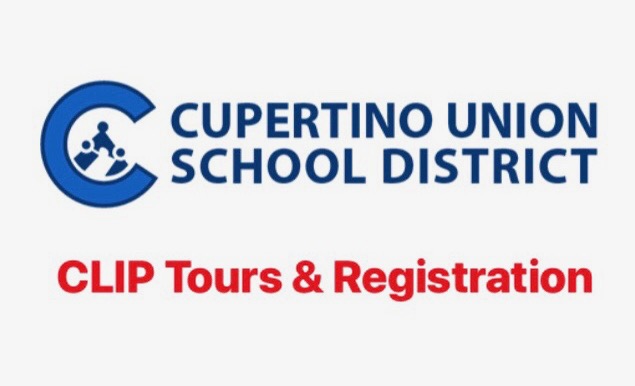 CLIP Tours are now Open!
Parents/guardians who do not already have a child in CLIP are required to attend a mandatory information meeting and tour. Prior to registering for a CLIP tour online, you need to register at your home school for kindergarten or student assignment for grades 1-8 at the Cupertino Union School District office.  Once you successfully registered your child, you will obtain the necessary information to register for a CLIP tour. CLIP K-5th grade (Meyerholz Elementary School) Tour Dates: CLIP tours are from 8:45 - 10:30 AM in the Meyerholz GLC/library. 在報名參加 CLIP 參觀說明會前，註冊幼稚班的家長必須先到你住家指定的學校去完成註冊手續並取得相關的收據來報名CLIP 參觀說明會。或註冊一年級到八年級插班生的家長是到庫市聯合學區辦公室的註冊組去完成註冊手續並取得相關的收據來報名CLIP 參觀說明會。 CLIP 參觀說明會是從早上8:45 到10:30。 CLIP registration linkis available.  CLIP 參觀說明會註冊連結。 2018/2019 CLIP Tour dates for the school year 2019-2020 are: 預定的ＣLIP 參觀說明會日期： Friday, November 9, 2018 Wednesday, November 28, 2018 Monday, December 10, 2018 Tuesday, December 18, 2018 Thursday, January 10, 2019 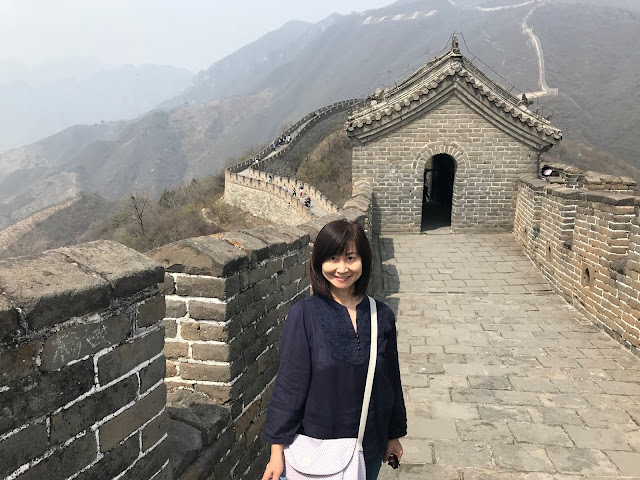 Every month we will feature a current student, teacher or alumni from CLIP to showcase on our blog.  If you are interested in being featured, contact web@cusdclipco.org.

First, can you talk a bit about your background?

I finished my Master’s degree in Chinese Literature at National Taiwan Normal University.
When I first came to Silicon Valley in 1994, I worked as a semiconductor layout designer. I used
CAD tools to draw the circuit layouts. I did this job for about 8 years, but because I had two little
kids at that time, I decided to quit my job and spent more time taking care of my family.
Now, my daughter just received her Master’s degree from Columbia University and works in
New York as a social worker. My son is a junior at UC Berkeley. My children are grown up, so I
decided to reenter the workforce. I liked to use my original education in teaching background
this time. I heard from my friend about this Clip IA job opportunity, so I gave it a try.
This is my third year at Meyerholz…
Read more 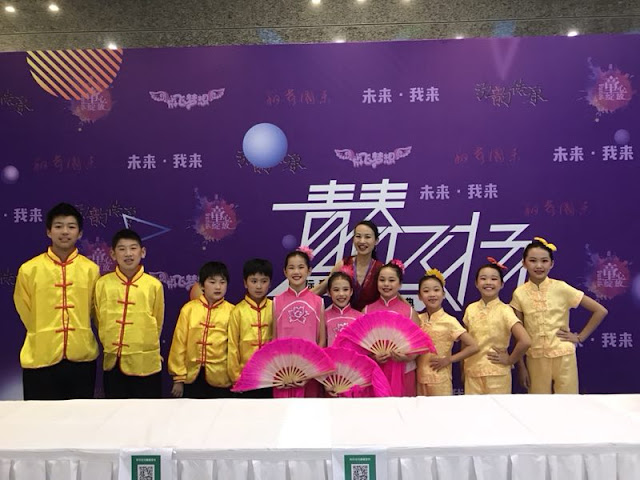 Congratulations to two of our CLIP students, 7th grader Lyria Zhu and 4th grader Ray Zhu.  Both Lyria and Ray went to Beijing this summer to compete in two national contests.
One contest is the 4th Huayun Cup National Mandarin Speech Contest. Lyria's solo speech ‘Rain of Osmanthus Flowers (桂花雨)’ won 1st place - champion of all international groups which includes competitors from six countries.
The other contest is the 13th National Youth Talent TV show, and both Lyria and Ray were members in a group performance (dancing, speech, and magic combo show).  Ray and Lyria gave speeches in Chinese.   The group was granted the  'Gold Award' by the referee committee.
Qing Zhu, Ray and Lyria's father, says, "We are so grateful that Meyerholz, Miller and CLIP has been providing excellent bilingual education and resources for Ray and Lyria! And we so proud to be part of this community!"
Congrats to Ray and Lyria! We're proud of you!